The Piano The Awakening of Women’s Subjectivity - PowerPoint PPT Presentation 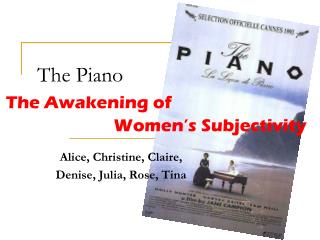 The Piano The Awakening of Women’s Subjectivity

The Piano The Awakening of Women’s Subjectivity Sense-level Subjectivity Analysis - . what is subjectivity?. the linguistic expression of somebody’s opinions,