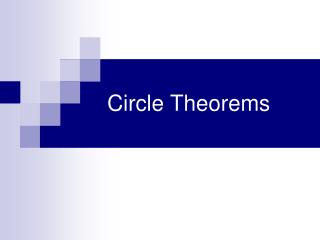 CIRCLE THEOREMS - . questions normally ask for the size of an angle and reasons why. in each case use the theorems you

CIRCLE THEOREMS - . tangents. a straight line can intersect a circle in three possible ways. it can be:. a tangent. a

Circle Theorems Part 3 - Tangents - . o. definition a tangent is a line which just touches the circumference of the