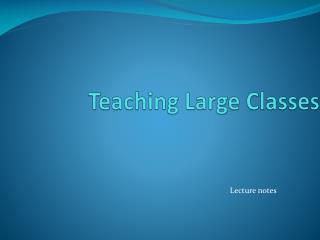 Teaching Large Classes. Lecture notes. Our ELT world…. The literature on teaching approaches and methods has over the years been dominated by theories and principles developed in favourable teaching circumstances with relatively little attention being given to under-privileged contexts. TEACHING HETEROGENEOUS CLASSES - Penny ur 2006 ability knowledge of english what is a heterogeneous class? it is a class

TEACHING HETEROGENEOUS CLASSES - . penny ur 2006. ability knowledge of english. what is a heterogeneous class?. it is a

Leading the teaching of literacy - . the research. “the jolly phonics children’s reading skills were 11 months above

Lean on Me - . there was once a teacher who was teaching first grade in a large elementary school. one morning all of the

Creating “Small” within “Large” - . one way cost savings can be realized is by consolidating separate sections

Are you familiar with CLT (Communicative Language Teaching)? - . 1- what do you know? 2- what would you like to know?.