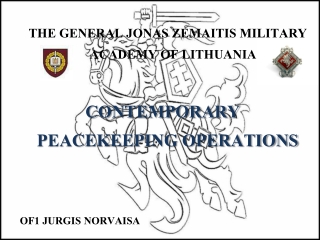 THE GENERAL JONAS Ž EMAITIS MILITARY ACADEMY OF LITHUANIA - . audiovisual method at the lessons of foreign

MILITARY ACADEMY - . history. established 1 april 1950 under the auspices of the university of pretoria moved to saldanha

The Academy of General Dentistry - . your voice for excellence through education and advocacy. {insert name of

The Academy of General Dentistry - . supporting the voice of the agd’s future. about us…. insert speaker name. thomas

Military Contractor Academy - Are you former member of military? do you want job that can take in your military

Jonas Ruškus Professor at Vytautas Magnus University, Lithuania - Europe in action conference. everyone can live by the

MILITARY MANAGEMENT AND LEADERSHIP ACADEMY - . leading the way through shaping the future, inspiring people and driving