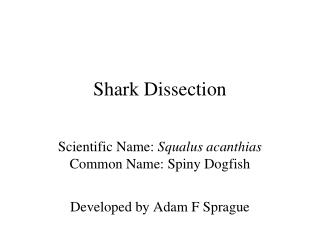 Forensic Pig Dissection - . what do you do with your pig when he loses his tail?. answer :. take him to any 're-tail'

Shark Tale - . the theme--- nobody vs somebody. appreciate a poem by emily dickinson --- i’m nobody! who are you?. i'm

Cookie Cutter Shark - . by matt heiken. what they are. the cookie cutter shark is a slow swimming shark. it has a glowing

Adaptations of a M egalodon shark - . by:brayden wilkerson. jaw size. i am 50feet when im open but when im closed im only