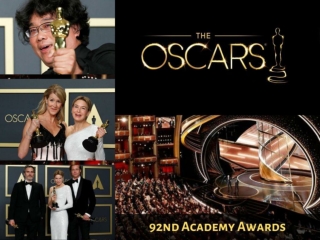 Memorable moments from the 2020 Academy Awards. The BRIT Awards 2020 - Highlights from the brit awards in

Oscars 2017: La La Land wins 6 awards - On business standard. there was high drama when the award for best film was

The Oscars 2015 - The 87th academy awards ceremony, presented by the academy of motion picture arts and sciences (ampas),

Drama At the Oscars - . some history…. not that there’s anything wrong with that!. how can a catastrophe be avoided?.

Best of the Oscars - Highlights from the 2016 academy

History of the Oscars - . the academy awards are voted on by members of the american academy of motion picture arts and

The Oscars and You - . brenna liponis, julie xie, and joe liotta. manufacturing consent by noam chomsky. bigelow vs.

How the Oscars Work - . melissa russell- ausley tom harris in seeing the pattern 244-247. springtime is for oscar.