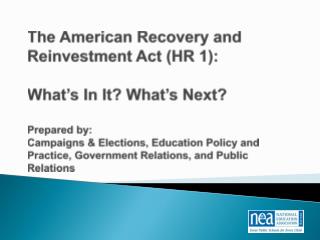 The American Recovery and Reinvestment Act (HR 1): What’s In It? What’s Next? Prepared by: Campaigns & Elections, Education Policy and Practice, Government Relations, and Public Relations. President Obama. Signed ARRA into law on February 17. President Barack Obama - . barack obama was born on august 4, 1961. he was born in honolulu, hawaii to his parents barack

According to President Obama: - E-technology and privacy: the new frontier of opportunity and liability victoria l. vance

President Ba rack Obama - . by krishnan chandra . facts about barack obama. he was the 44 th president of the united

Letter to President Obama - . 1. we share a sense of urgency to give each child a high quality education. 2. children are

President Obama and Congress in 2009 - . james a. thurber director and professor center for congressional and