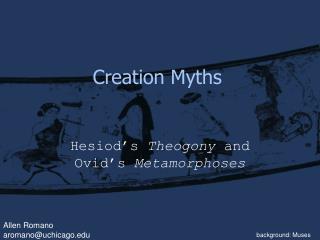 Creation Myths - . definition. a creation myth is a symbolic narrative of how the world began and how people first came

Myths - . myths are symbolic tales of the distant past that concern the origin and nature of the universe, may be

The Theology of Creation - . introduction to catholicism fr. llane briese. creation. the study of creation is important

CREATION - We’ve all got to start somewhere. creation. necessities. myths use metaphor to explain higher concepts. many

Greek Myths - . focus: to plan a creative myth. myths. what is a myth? a myth is a made-up story that explains the

How do we use Religion? - . creation myths science for public understanding. religion. why do civilizations have

A CDK007 Production - . the origin of life. (turn up your volume.). since the dawn of humanity, civilizations have

CREATION - . we’ve all got to start somewhere. necessities. myths use metaphor to explain higher concepts. many of the

6 Myths about Adventist Education - . cognitivegenesis study findings have identified a number of myths or misconceptions

Myths - . what is it?. what is a myths?. myths are made up stories that try to explain how our world works and how we

Divine Myths - . myths of creation: the origins of mortals. what about human beings?. why is our world the way it is?