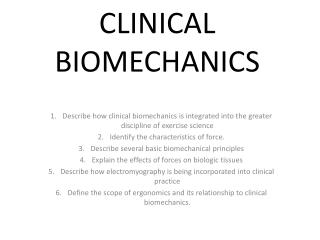 CLINICAL BIOMECHANICS. Describe how clinical biomechanics is integrated into the greater discipline of exercise science Identify the characteristics of force. Describe several basic biomechanical principles Explain the effects of forces on biologic tissues

Biomechanics - . applies mechanics to biology physiological and medical applications are the main points in this course

Biomechanics 2015 - . section 1:1 an introduction to biomechanics dr. moira mcpherson, school of kinesiology . an

Introduction to Biomechanics - Biomechanics what is it?. the mechanical bases of biological systems.the application of