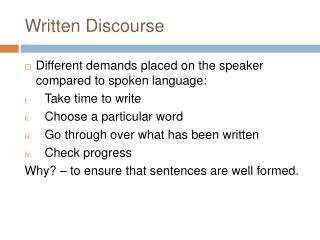 Written Discourse. Different demands placed on the speaker compared to spoken language: Take time to write Choose a particular word Go through over what has been written Check progress Why? – to ensure that sentences are well formed. Teaching writing in the classroom.

Discourse Markers - . a ‘short’ guide. what are they and why should i care?. they add meaning they warn of upcoming

Defining Discourse - . what is discourse?. consider the following definitions of discourse: discourse is language above