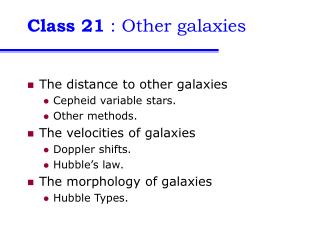 Class 21 : Other galaxies. The distance to other galaxies Cepheid variable stars. Other methods. The velocities of galaxies Doppler shifts. Hubble’s law. The morphology of galaxies Hubble Types. I : Standard Candles. How to measure distances in astronomy:

Chapter 19 Galaxies And the Foundation of Modern Cosmology - . how are the lives of galaxies connected with the history

VLBA Parallaxes Across the Milky Way and the Distance to NGC 4258 - . mark j. reid harvard-smithsonian center for

Earth and Its Neighbours - Unit 5. earth and its neighbours. a student is asking his teacher about the sky at night.