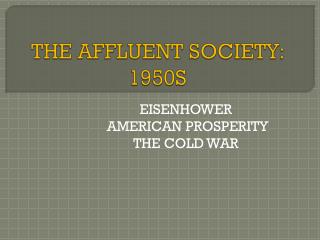 THE AFFLUENT SOCIETY: 1950S. EISENHOWER AMERICAN PROSPERITY THE COLD WAR. Two Factors that Defined America in the 1950s and 1960s. Prosperity. Fight against communism. Economic boom of the 1950s led to an increase in American confidence and world power.

An Affluent Society, 1953-1960 - . the golden age. the changing society. the new consumer culture. the interstate highway

The Fifties - . introduction to affluence. the gi bill . the suburbs: the american dream. levittown, ny one of the first

The Affluent Society - . making america the best place to live. “the buck stops here”. presidents of the 1950s. the

Conformity and Obedience - . conformity. a change in behavior or belief as a result of real or imagined social norms.

BHS Slide Template - . last updated june 29, 2006. how to use this template. to start a new presentation using this

Chapter 30 The Affluent Society - . the economy begins to improve in the 1950s 1 st modern computer is invented mark 1