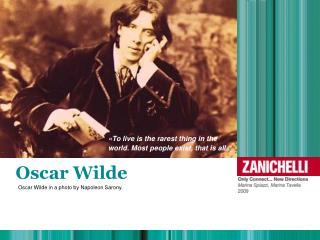 Oscar Wilde - . presentation about this writer.

Oscar Wilde - . 1854 - 1900. wilde was born in dublin to a well-known surgeon and an artistic mother he attended oxford

Oscar Wilde - . aesthete of aesthetes what’s in a name! the poet is wilde, but his poetry’s tame. with lord afred

Oscar Wilde - «to live is the rarest thing in the world. most people exist, that is all». oscar wilde in a photo by

Oscar Wilde - . an irish writer and poet london's most popular playwrights in the early 1890s known for his humorous and

Oscar Wilde - . dramatist, poet, novelist and essayist, spokesman for the school of “art for art's sake”, the leader

OSCAR WILDE - And the wild regrets, and the bloody sweats, none knew so well then i: for he who lives more lives than

Oscar Wilde - . the picture of dorian gray. “it is only shallow people who do not judge by appearances. the true

Oscar Wilde - . “i am so clever that sometimes i don’t understand a single word of what i am saying”. “it is only

Oscar Wilde - . oscar wilde. born in ireland, 1854. “fop”: one who is foolishly attentive to and vain of his