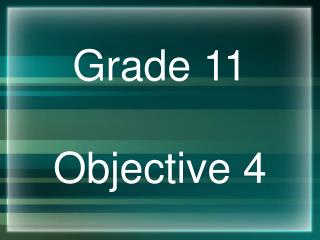 Objective - Identify the force pairs of an interaction and the objects on which they act, based on newton’s 3 rd law.

Objective 9.1 - . students will be able to: classify polynomials and write polynomials in standard form; evaluate

Objective: - Lab 2: unit stations. lab 2. aim : what units and instruments do we use in chemistry to measure length,

Objective - . “to excel, according to internationally accepted standards of scientific excellence in the creation of Overall Objective - . the main objective of e-nvision is the development and validation of an innovative e-business

OBJECTIVE - Self-efficacy and memory aging: the impact of a memory intervention based on self-efficacy robin l. west,

1. Objective - Hbf-500 clinical evaluation test. 1. objective. to evaluate the measurement accuracy of hbf-500, and to Objective 4.03 - . objective 4.03: explain how the periodic table is a model for: • classifying elements

OBJECTIVE: - . to study a basic scientific explanation of the origin of the world and how christians respond to this.

Objective - . to use media clips, an acronym and real life scenarios to understand the criteria of a just war and decide

Objective &amp; Do Now - . objective i dentify the origins of the civil rights movement do now w hat are some