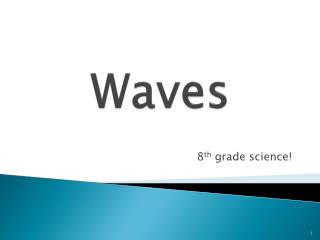 What are Waves? - . what do you think of?. types of waves:. parts of waves:. waves. light waves - vibration of photons.

Waves - . jack brandes. what a re waves?. waves are a disturbance in matter as the energy moves through the air, water,

Focus : Waves - Objective : compare the properties of waves to the wavelike property of energy in earthquakes, light and

Waves - . students will learn about waves. waves. waves transfer energy without the transfer of mass. a wave is a

Waves and Vibrations - . waves. waves are everywhere. whether we recognize it or not, we encounter waves on a daily