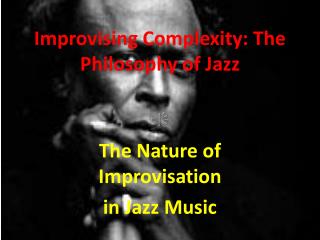 Improvising Complexity: The Philosophy of Jazz Improvising Complexity: The Philosophy of Jazz

New science of complexity? - . much attention has been given to “complex adaptive systems” in the last decade.

Complexity and pain - . the problem definitions and explanations of complex systems, chaos, dynamics and emergence

Complexity is more than a Label: A Look at Affordances and Homologies - . michael lissack executive director institute

Philosophy and Nature of Science - . part 1. philosophy part 2. philosophers. basic questions. how do we know? what is