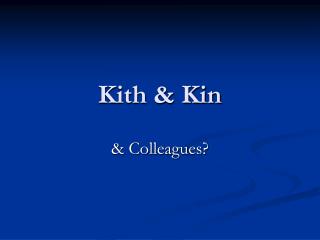 Kith & Kin. & Colleagues?. Kith & Kin – and Colleagues?. The effects, consequences and inter-relationships between chemical dependency and family dynamics have been studied over the years from a variety of angles – both in terms of causative factors for substance use and as consequences of it.

The ‘ sit ’ and the ‘ com ’ of sitcom - . most sitcoms feature a group of characters trapped in a particular