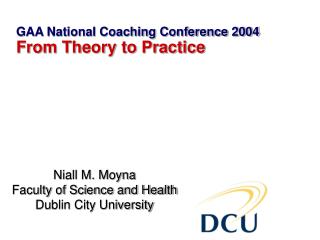 Faculty of Science and Humanities SRM UNIVERSITY - . m.c.a - regulations, curriculum and syllabus (with effect from

Leadership Through Change Dublin City University - . coaching through change joan bennett. the world as we know it is

UNIVERSITY OF PRETORIA Faculty of Veterinary Science - Information on recruitment, selection and admission of students