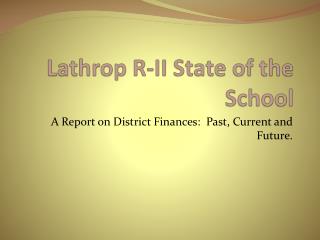 Lathrop R-II State of the School Lathrop R-II State of the School. A Report on District Finances: Past, Current and Future. Financial Past. Passed Bond Issue in 2006 to continue with the current levy to build new high school.

Lathrop R-II State of the School

PSU Graduate School of Education - . state of the school presentation and annual report september 2008. friends of the

George Mason School of Law - . contracts i contract law in the state of nature f.h. buckley fbuckley@gmu.edu. next day.

Principles of Photogrammetry: Stereoscopic Parallax - . lecture 7 prepared by r. lathrop with material from avery and