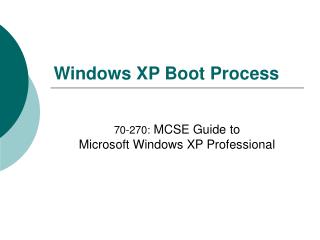 Windows Vista Boot process - . all the computer running windows vista have the same start up sequence: power-on self test

windows xp - I've... seen things you people wouldn't believe... attack ships on fire off the shoulder of orion. i watched

Windows XP - . history. windows xp is based on the nt kernel developed in 1988 xp was originally sold as an upgrade from

Presentation 31 – The Windows Boot Process - . objectives. at the end of this presentation, you will be able to:.