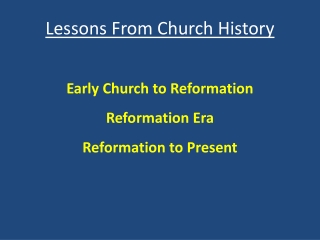 Lessons From Church History. Early Church to Reformation Reformation Era Reformation to Present. Why Study Church History?. See God is a God of Purpose See our great heritage Keeps our walk in perspective See it is actually “His Story” See there is nothing new under the sun

New ways of being Church for the sake of the gospel - Session 1. bob &amp; mary hopkins + sally gaze. new ways of

From Anomaly to Problem to Physics: Lessons from Solar Neutrinos - . overview some pre-history the development of the

Survey of Church History - . bi 3325-2. formation of the canon. the need for a canon 6 main developments forced the

Chapter 5: The Four Marks of the Church - . the church: sacrament of salvation. 1. the first mark: one. basic questions

Natural Church Development - . an introduction to a natural way to realise growth in your church drawn from christian a.

How did the Church play a vital role in medieval life? - . the church dominates medieval life. priest in each village was

God Chasers - . capturing god and being captivated by him the church &amp; commitment january 18, 2011. the church

The Work of The Church - . the new testament clearly reveals the work the lord’s church is authorized to do.