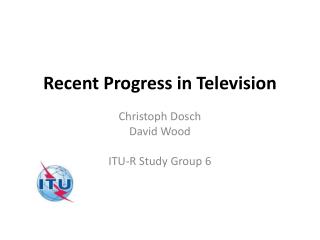 Recent Progress in Television. Christoph Dosch David Wood ITU-R Study Group 6. What to expect?. What is the progress?. Increasing the viewer’s sense of involvement and quality of experience. Recent progress - . the mass production of straws in dubna including quality control is proceeding . about 2 000 straws

Recent Progress in Manure Digestion - . produced by the minnesota department of agriculture 2007 funding for this project

Recent Progress in PRSP Implementation - . ministry of health, labor and social welfare government of the republic of

Recent progress in understanding breakdown - . i would like to start my presentation with what i believe are some of the

Recent progress in optical flow - . progress. presented by : darya frolova and denis simakov. optical flow is not in