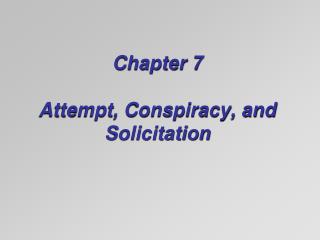 Chapter 7 Attempt, Conspiracy, and Solicitation. Introduction. Inchoate (“beginning”) crimes provide that individuals can be convicted & punished for an intent to commit a crime when accompanied by a significant step toward the commission of the crime. Three Types of Inchoate Crimes. Suicide - . chapter 10. suicide. suicide is a leading cause of death in the world there are about 700,000 people who die

Chapter 50 - . sensory and motor mechanisms. overview: sensing and acting. bats use sonar to detect their prey moths, a