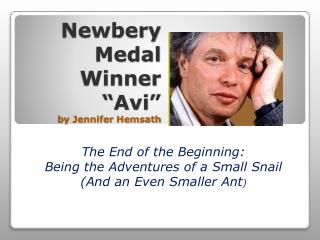 Newbery Medal Winner “ Avi ” by Jennifer Hemsath. The End of the Beginning: Being the Adventures of a Small Snail (And an Even Smaller Ant ). Let’s Meet Our Author. Avi was born in New York, New York in 1937

Hive Awards WInners - This is the slideshow from the first annual hive awards. a more in-depth look at the winner will be