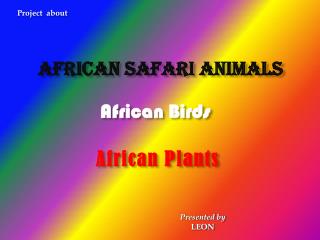 African Animals! - . by: megan. contents. habitats and the animals that live

African animals - . by o wen b. c heetah. there is not an faster animal than a cheetah. the cheetah can run up to 110

African Animals - . by carolyn. elephants. they like the leaves from the top of the tree. they live in the grasslands. if

South African Safari - How long have you been planning for a south african safari? stop thinking and call us at (831)

African Safari Tours - Want to go on a journey of exploring east africa and central africa from a new aspect? probably,

African safari packages - Kenya is a wildlife paradise, there are various things you can do, and african safe travels

African Safari Comparisons - Kenya Safari Vs Tanzania Safari? - Is not it a tough task to compare between kenya and