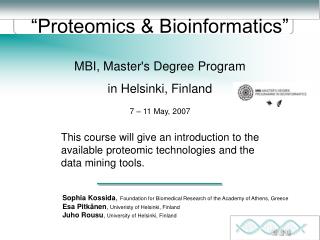 “Proteomics & Bioinformatics”. MBI, Master's Degree Program in Helsinki, Finland. 7 – 11 May, 2007. This course will give an introduction to the available proteomic technologies and the data mining tools. . Sophia Kossida , Foundation for Biomedical Research of the Academy of Athens, Greece Introduction to Proteomics - . what is proteomics?. proteomics - a newly emerging field of life science research that

Proteomics - . what is proteomics .  is the large-scale study of proteins, particularly

Center for Supercomputing and Bioinformatics - . areas of activity. “ platform for scientific and technology support on

Structural proteomics - . two handouts for this week. proteomics section from book already assigned. what is structural