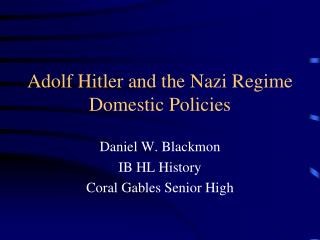 Adolf Hitler - . adolf hitler. by: dominic depasquale. adolf hitler was born in austria on april 20 th in 1989. he was

The Nazi Party - . lesson starter: write down all that you know about the german nazi party. you should aim for at least

Hitler and Nazi Germany - . warmup. http://youtu.be/d0otwfyahyg question: how did hitler and the nazi party get to the

Adolph Hitler &amp; Nazi Party - . t here were many germans who were bitter about germany’s system of government,

HITLER and the RISE of NAZI Germany - . ?? what you should know ??. from where was hitler born? name the party led by

Adolf Eichmann - . one of the most feared and hated nazi leaders who was responsible for the deaths of millions of jews d

The Rise of Hitler and the Nazi Party - . although hitler became the chancellor of germany in 1933 he was only the leader

Domestic Policies of Hitler: Economy, Education, Arts, Media, and Propaganda - . hitler and the economy – dealing with