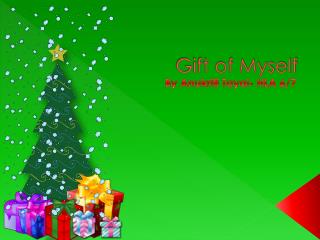 Gift of Myself. By Anukriti Tayal- HLA 6/7. Introduction. For my Gift Of Myself project, I decided to bake a cake. The recipients of my gift were my family and friends. Song of Myself - . walt whitman. section 1. speaker wants acceptance as a representative of humanity. we are all

“Song of Myself” - . i am i am of old and young, of the foolish as much as the wise, regardless of others, ever

MYSELF - . hello! my name is harishankar.r. my school’s name is christ nagar. i am 11 years old and study in sixth

MYSELF - . my name is adarsh j kumar . i am studying in division q of 6 th grade in christ nagar higher secondary school

Myself - . by mr. mak mang tao. myself. my family my hobbies my friends my favourite sites. my family. father and mother

Allow Myself to Introduce … Myself - . the human microbiome in health and disease cpt bc kirkup, ph.d. bluf. humans are