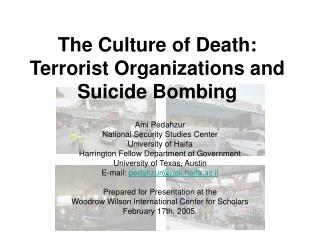 The Culture of Death: Terrorist Organizations and Suicide Bombing

The Culture of Death: Terrorist Organizations and Suicide Bombing

President Ranasinghe Premadasa and 23 others are killed by a suicide bomber in Colombo. - . six sf personnel are killed

The Culture of Muslim Terrorism - . madrassas, madafas, and fatwas the al qaeda experience. unclassified. this

Terrorism - . reflections on terrorism. we could just focus on what our readings and our model tells us. but, then we

TERRORISM - . definition of terrorism it is a term used to describe using power and force against people or their

TERRORISM - . terrorism history-1. on november 5, 1605 a group of conspirators lead by guy fawkes, attempted to destroy

Terrorism - . political in aims and motives threatens to use or uses violence designed to have far-reaching psychological

Every year, over 800,000 people die from suicide; - This roughly corresponds to one death every 40 seconds. the number