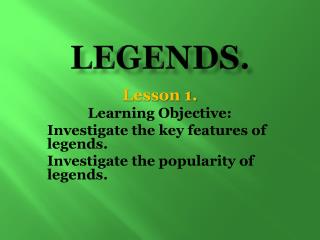 Legends - . 10 th grade english- leach hero archetype 2011-2012 chhs. legends. are popular stories about the past that

Urban Legends - . myths. religious origins from the past explain the origins of life or define cultural values may be

Arthur Legends - . fact vs. fiction excalibur gawain and the green knight. dark ages. the 4 th and 5 th centuries ce the

Local Legends - . definition of a legend: a nonhistorical or unverifiable story handed down by tradition from earlier

CASTLE LEGENDS - . hungary autumn 2011 be part of the legend. beginnings of a legend

URBAN LEGENDS - . have always been around internet has magnified their influence. 3 types of rumors that emerge following

Polish legends - . legend about lech, czech and rus (how the land of poland started to exist) legend about popiel and

Urban Legends - . the warehouse madrid upper intermediate class. pass on. to pass on a message is to tell somebody a