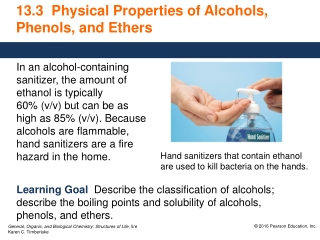 13.3 Physical Properties of Alcohols, Phenols, and Ethers. In an alcohol-containing sanitizer , the amount of ethanol is typically 60 % ( v/v) but can be as high as 85% (v/v). Because alcohols are flammable, hand sanitizers are a fire hazard in the home. Alcohols, Phenols and Thiols , and ethers - . nomencalture of alcohols use the end ol examples. hydrogen bonding in