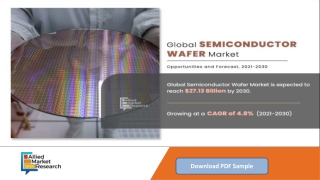 Semiconductor Wafer Market: 12 Inch Segment is Projected as one of the Most Lucrative Segments