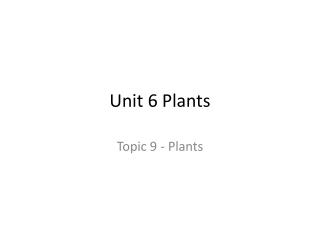 Plants Unit - . chapter 3. flower parts. petals often the most colorful part of the flower. stamen thin stalk with a

Unit 7 Plants - . ch. 22 plant diversity. what is a plant?. plants are multicellular eukaryotes that have cell walls made

Unit 2:Plants - . essential questions. how do plants obtain water and nutrients needed for survival? how do plants

Plants – Unit Overview - . a basic knowledge of plant anatomy and physiology is essential for crop management .

Plants Unit Chapter Four - . mrs . swanson. what is a plant?. i. the plant kingdom a. autotrophic- make their own food