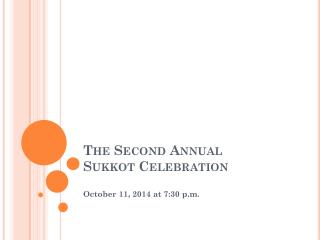 Eclectic RE or integrated RE? Case studies in learning method and learning practice - . if pedagogy in re is about the

The Imminent Invasion of Israel

Psalms: - . the songbook of the old testament. psalms 119:54 “thy statutes have been my songs in the house of my

PENTECOST - . pentecost. when we were baptised we were given the gift of the holy spirit. thank god for his love. thank

The Festival of Booths - . sukkot. what is sukkot?. seven day festival on the fifteenth day of tishri (generally lands in

‘The Journey of the magi’ By, T.S. Eliot - . project by- matthew rhineberger. t.s. eliot- life, poetry, and death

The Passover Rite - . the passover rite. on tenth day, pick a lamb on 14 th day, at evening, kill the lamb blood upon