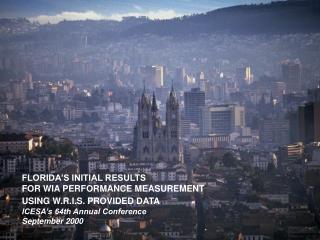 FLORIDA’S INITIAL RESULTS FOR WIA PERFORMANCE MEASUREMENT USING W.R.I.S. PROVIDED DATA ICESA’s 64th Annual Conference September 2000. Overview. Florida’s approach... Which states have provided data so far? Initial results of linkages with WRIS ... Where are they now, ...if not in Florida?

Interpretation of data in Reporting on results under SWHISA context - . selamyihun. performance measurement. it is

MI Measurement And D ata - . by ryan mcgannon. the mi’s measurement and data was a project we had to do in term 1. i

Pay for Performance in Florida - . the past, present &amp; future of pfp in florida. brian dougherty florida

Measurement Based on Images - . cost e54 tampere may 6 th , 2009 heimo ihalainen. measurement based on images scientific

Data Driven Performance Management - . how can it help you today?. it can help. agenda. the challenge understand what