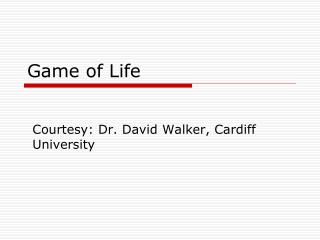 Play Minesweeper Game in several Modes At Solitairegameworld - If you're a game lover and wish to stay yourself busy,

LIFE is like a game of POKER - . lets use texas “hold’em” poker as a metaphor! life deals you 7 cards use the best

John Conway’s Game of Life - . john von neumann wanted to find/create a machine that could replicate itself found an

The Game of L I F E - . week of 10/18. monday. groceries: you went grocery shopping over the weekend to stock up for the

The Game of “Life” - . today you will: create a game board of life think of the short, intermediate, and long term

The Game of L I F E - . week of 11/22. monday. groceries: you went grocery shopping over the weekend to stock up for t

Lab 9a – The Game of Life - . &quot;write a c program to display successive generations of the game of life using a