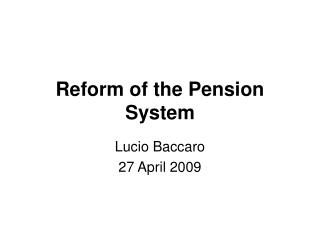 Pensions and Other Postretirement Benefits - . 17. i agree to make payments into a fund for future retirement benefits

State Benefits - . too important to leave to chance!. things to consider – the context. impact on your budgeting when

Medicaid Reform - . presentation to the board of county commissioners november 13, 2007. medicaid

Prison and Asylum Reform - . the prison reform occurred during the early 1800's following the temperance movement.it was