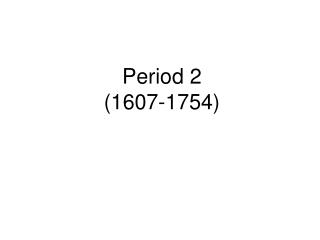 Period 2 (1607-1754). Early English Settlements. Because England got such a late start in the colonization game, they couldn’t just set up their colonies wherever they wanted. Spain dominated South America, Mexico, the West Indies, the American Southwest, and Florida Period 2 1607 - 1754 - . europeans and american indians fought for dominance, control, and security in north america, and

Steps that led to The Declaration of Independence - . king of england (king george) vs. the colonies. jamestown colony.