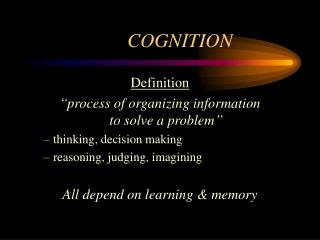 Cognition - . the act or process of knowing including both awareness and judgment. not observable (not a behavior) –

Cognition - . create a concept map/flow chart/graphic organizer organize all of the content into their larger

Cognition - . aphasia - a disturbance of language use. because of brain pathology, the patient becomes unable to use

Cognition - . thinking, gaining knowledge, and dealing with knowledge. became more and more popular in 1950s through the