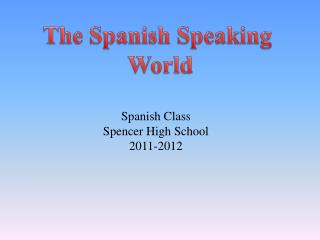 Helping Your Spanish-Speaking Patients - . kathryn birkhead director of diversity and inclusion jones center. who are the

Mysteries of the Spanish-Speaking World - . due: lunes, el siete de marzo. guidelines:. you will be working alone

The Spanish in the New World - . spain before the new world. 15 th c spain multi-ethnic (had been colonized by romans,

Spanish Speaking Cultures - . 3.2 characteristics and language. focus / review. share your current event with the rest of

Spanish Speaking Countries - . where can i use this language?. 9. venezuela. south america. 2. columbia. 3. ecuador. 4.