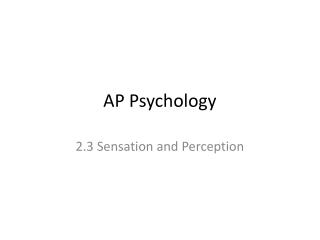 AP Psychology. 2.3 Sensation and Perception. Sensation. Process by which our sensory receptors respond to light, sound, odor, textures, and taste Our eyes, ears, nose, tongue, and skin comprise an elaborate sensory system that receives and processes information from the environment. Sensation. Happiness and Positive Psychology - . dr. phil watkins. i. an introduction to positive psychology. a) the importance

WELCOME TO Abnormal Psychology - . jill norvilitis. aleksey the great. is he mentally ill? how do you know? what type of