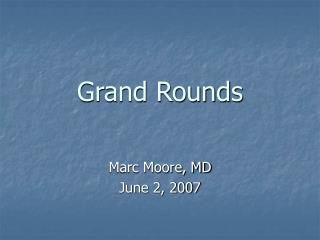 Grand Rounds. Marc Moore, MD June 2, 2007. HPI. 33 yo wf was shopping 2 months prior when she noticed blinking lights OU lasting 30 minutes. She has had no flashes since. Occasional floater OD. Seen by ophthalmologist who recommended further evaluation by retina due to exam findings.

Grand Rounds - Objectives. to present a case in the icu illustrating the development of ileus/intestinal