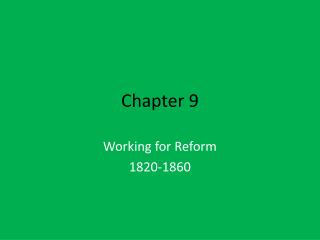 Chapter 9. Working for Reform 1820-1860. Objectives. Describe the main characteristics of the Mormons Understand what motivated the temperance reformers Describe how educational opportunities changed in the early 1800’s Recount what sparked the call for immediate abolition.