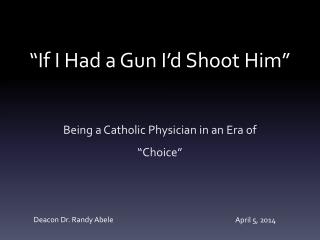 “If I Had a Gun I’d Shoot Him”. Being a Catholic Physician in an Era of “Choice”. Deacon Dr. Randy Abele. April 5, 2014. Physicians and End-of-Life Care. Euthanasia Physician-assisted Suicide Advance Care Directives. Physician’s Role.

BETTER PHOTOS - . how to shoot like the pros. c.t. henry photographer + instructor. introductions. name where you’re

Shoot The Messenger “win32 Shatter Attacks” by Brett Moore - . corporate disclaimer. the information included in this

Artist Interpretation - . shooting assignment #2. before you pick and shoot:. how can my subject best reflect/mimic my

Intro to Testing - . testing. hardware. software. software 2/3 of the time/budget is spent in debugging. test is a module

MARKSMANSHIP PRINCIPLES - . previous page. home page. help. next page. “ you have been trained to take your place as a

The Teacher’s Guide - . www.theteachersguide.com free resources for teachers. who wants to be a millionaire?. from seed