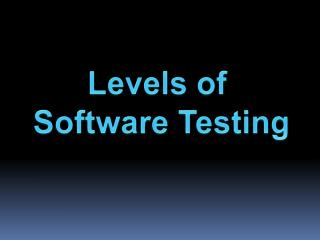 Software Testing: How To Generate Test Data - Test data forms an important aspect of software testing. it can be called

Types of Software Testing - Software testing is a process that should be done during the development process. in other

Software Testing Strategies - . “how do you organise your software tests?”. lecture objectives. to describe the

Testing IDS - . testing ids. despite the enormous investment in ids technology, no comprehensive and scientifically