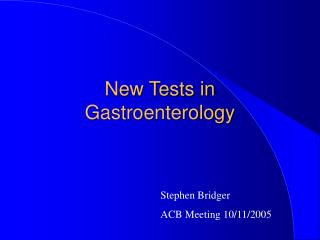 New Tests in Gastroenterology. Stephen Bridger ACB Meeting 10/11/2005. Gastroenterology. Too Busy Too Many patients IBS 14 - 24% of adult population, + 28% of referrals to GI clinics Too Many Investigations Doubling of endoscopy workload in last 10 yrs The American College of Gastroenterology Auxiliary Club would like to invite you to - . washington d.c. acg annual

Assessment of Digestive and Gastrointestinal Function - . functions of the digestive tract. breakdown of food for