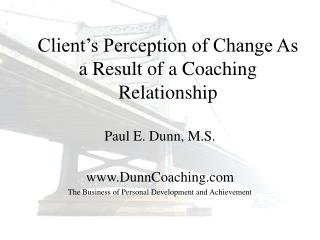 Client’s Perception of Change As a Result of a Coaching Relationship. Paul E. Dunn, M.S. www.DunnCoaching.com The Business of Personal Development and Achievement. Coaching. Coaching is a rapidly emerging field. Where is CRM headed? - What is the future of crm? it dawned on us that the customer/brand relationship will not change,

The Therapeutic Nurse-Client Relationship - . use of therapeutic communication. self awareness &amp; nurse - client

Perception &amp; Consciousness - . unit 2. how do we sense our worlds ?. learning objectives distinguish between

KNR 205: Scientific Principles of Coaching - . introduction. general course stuff. this is a new course...first for me,