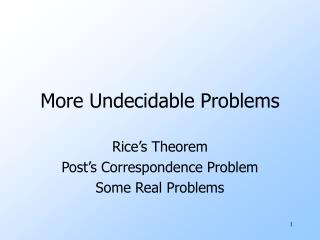 Lecture 19. Reduction: More Undecidable problems - . it turns out that many problems are

Undecidable Problems (unsolvable problems) - . decidable languages. recall that: a language is decidable , if there is a

Undecidable Problems Decidable problem: - Yes/no question such that there exists a tm (or equivalently a c or java

More Problems - . what would the displacement time graph look like for this problem?. i leave for school in the morning

More problems - . calculate. write java code that defines a real number called a, and gives it the value of 3.2. then

MORE GENETICS PROBLEMS - . dragons either have forked tongues or they do not. it is a trait determined

More Review Problems - . (an answer key with work will be uploaded later

More EnergyPractice Problems - . velocity from pe. 2. a 5000 kg coaster is released 20 meters above the ground on a