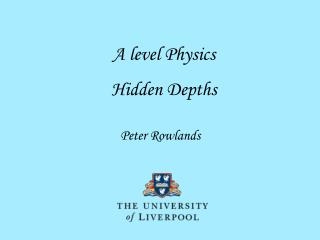 A level Physics Hidden Depths. Peter Rowlands. The structure of this presentation. The presentation will be in four main parts: 1 Kinematics and kinetic theory 2 Gravity, photons and electron spin 3 What is the speed of light? 4 The origins of quantum theory Clicker Use in upper-level physics courses - . michael dubson dept. of physics u. colorado at boulder

High Level Triggers for B Physics: Status and plans - . by simon george for the hlt b-physics group. pesa group. physics

The Hidden One - . by daniel howard. leto (latona). born to the titans phoebe and coeus nomenclatures include “bright