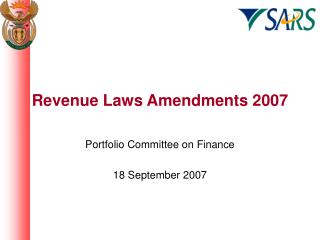 Constitution/By-Laws Committee Proposed Amendments - . the following issues have already been approved by the grad

Revenue Laws Amendment B ill, 2003 - . representations and comments to the portfolio committee on finance thursday, 23

Amendments - . slavery is abolished. 13 th (free). all persons born or naturalized in the united states is a citizen and

EDUCATION LAWS AMENDMENT ACT.2007 - . searches and seizures. what does section 8a of the sasa say?. dangerous objects and